One of the best things about diving in Bali? The outstanding diversity. Your diving holiday can include everything from extensive drop-offs and well-preserved shipwrecks to massive mola-mola and unusual critters.

All in one destination. When you are out of the water, the top-side beauty of the architecture and Hindu culture is stunning as well.

Yes: you can have your cake and eat it too in Bali. After you have read this dive guide and decide to plan your holiday to this wonderful Indonesian paradise, be sure to check out our list of 101 awesome things to do in Bali HERE. Shipwreck of Bali
The best and most popular shipwreck are found in Tulamben, near Salayar and Amed. These destinations also happen to offer top muck diving, but more on that later!

The USAT Liberty was a US war ship that was bombed during WW2, then beached to save it. years later a volcano erupted and pushed the wreck just offshore, where it now sits in depths from 3 meters down to 28.

The wreck is now cocooned in layers of coral and growth, and is a habitat for countless marine life, making it a great place to dive and explore.

Expect to run into barracuda schools, gigantic moray eels, equally-huge schools of bumphead parrotfish, and even some macro such as nudibranchs and leafy scorpion fish. This shore dive is best enjoyed either early in the morning or on a magical night dive. Plus, it is easily reached from either Tulamben or Amed. 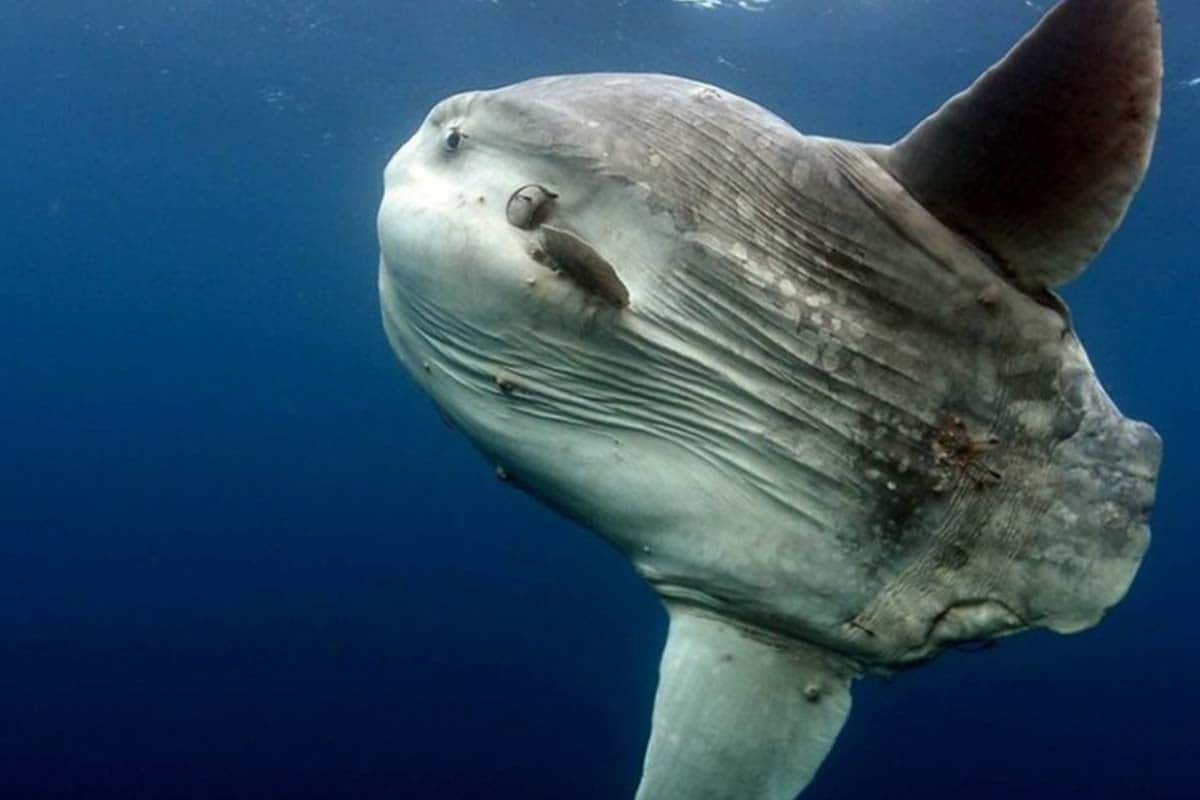 A WWII patrol ship, also surrounded by hard and soft corals; nudis and frogfish; giant groupers and barracudas. Batfish, octopuses, jack fish, and blue-spotted stingrays also make an appearance at this small, but lively wreck dive off the shores of Amed

BONUS? Japanese Wreck is surrounded by a rich reef, making it a great Bali dive site for coral lovers as well. This wreck combined with the Liberty will make one awesome dive trip.

Have a soft spot for night dives and macro life? Then this wreck in Padang Bai is worth your time. 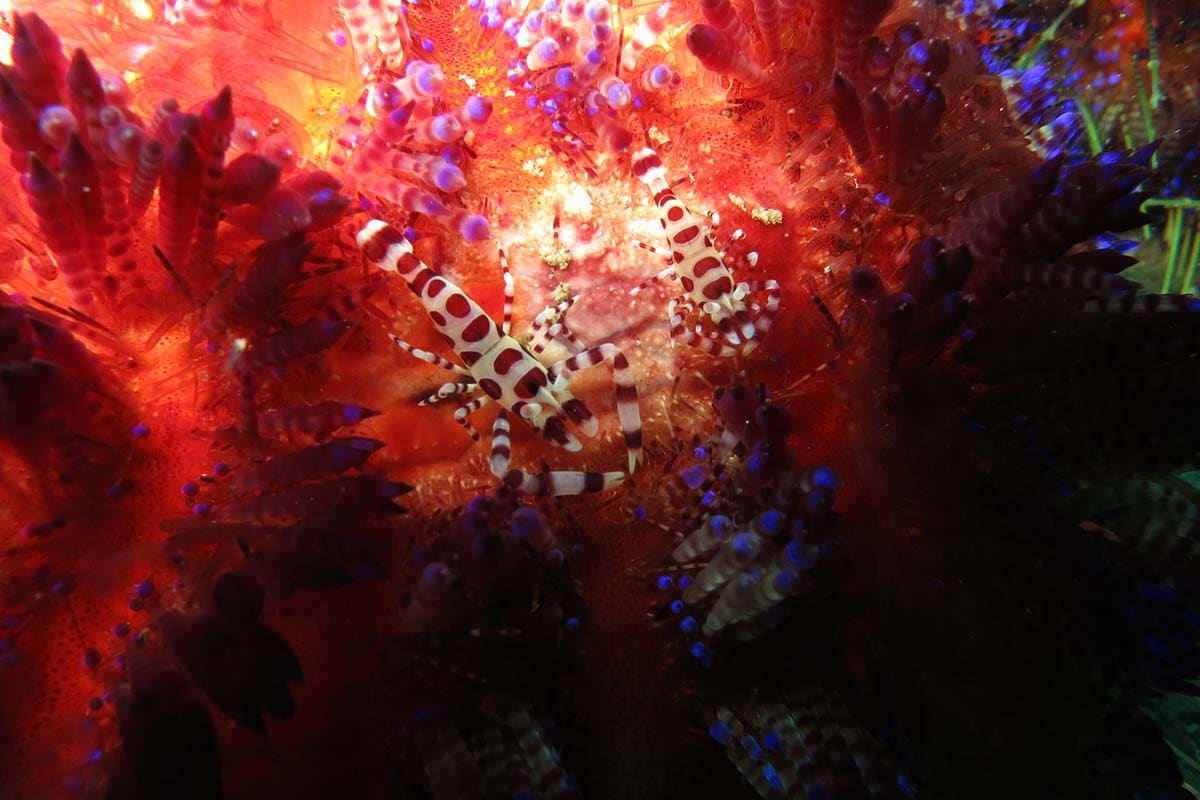 Many of the best drop-offs and walls are located by Pemuteran, in the Northwest. Yet, a few other Bali coral dive sites worth a visit are sprinkled throughout Nusa Penida and even Tulamben/Amed.

This island off the Taman Nasional Bali Barat might as well be the gate to coral reef Heaven. Expect superb visibility, healthy rich walls, and abundant reef life. One of the top regions for Bali diving! The top 4 dive sites there, all right next to each other, are: 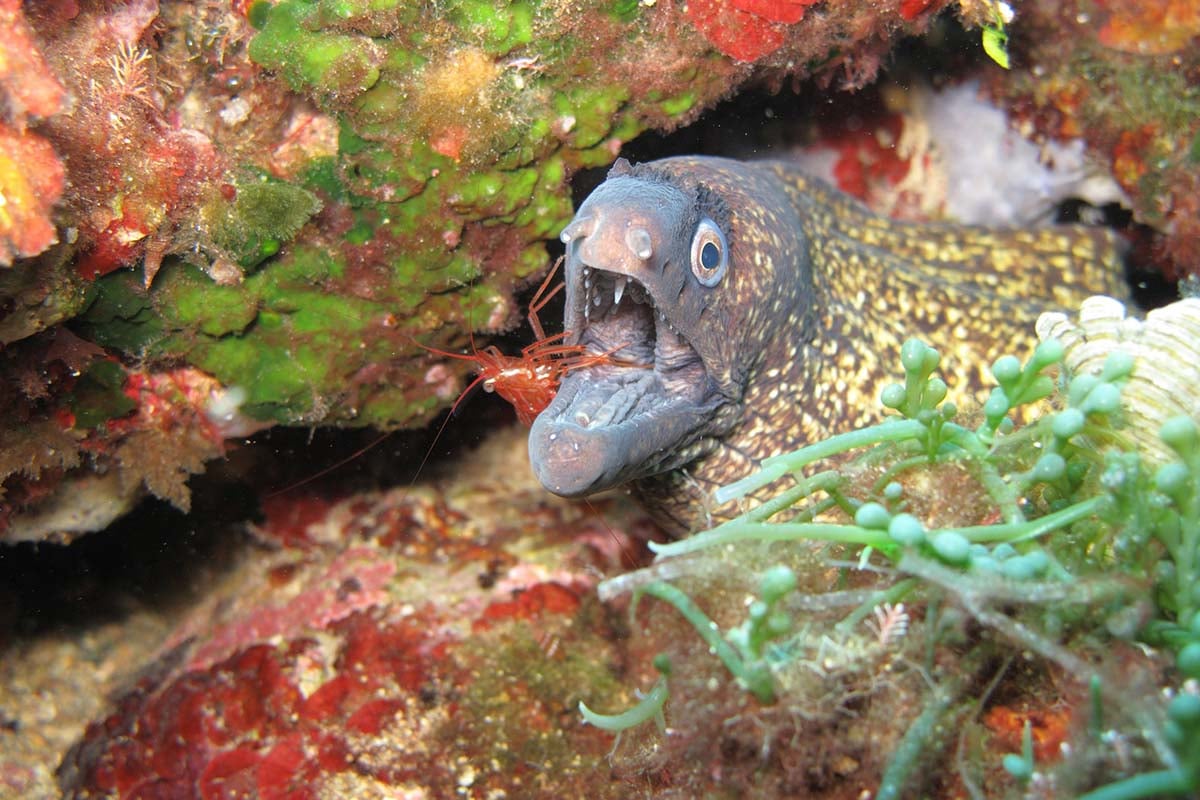 Off to a rough start at the surface, only recommended to advanced divers. Once underwater though, you will be greeted by a cave filled with white-tip reef sharks, big lobsters, and lionfish. After the swim through, colorful corals, ranging from the whip, soft, hard to feather stars and crinoids, pop in front of your eyes.

Octopuses, moray eels, mantis and commensal shrimps make an appearance as well. Add to that combo superb visibility–making Biaha quite the ride!

Another wonderful shore dive in my Bali diving guide, suitable for any level. The 70-meter drop-off is an easy round-trip. Common sightings include octopus, frogfish, stonefish, barracuda, lionfish, and even black-tip reef sharks.

This Amed shore dive ranges between 12 and 22 meters, but there’s quite a bit of marine life closer to land–making it an outstanding Bali site for snorkelers as well.

Further to the right of the beach, you’ll find the Wall. Impressive 50-meter drop sprinkled with sea fans, sponge barrels, and other beauties. Another superb spot for Bali diving is an easy boat ride from Sanur in the South. Forceful currents and microclimates equal an outstanding underwater show that, unfortunately, can only be enjoyed by experienced divers.

Better yet? Nusa Penida so happens to be one of these best spots in the world to swim with giant mola-molas and manta rays! Top coral dive sites in Nusa Penida include:
• Sampalan: furious drifts, coupled with stunning coral and hundreds of reef fish shoals make it my favorite in this category
• Mangrove Point: just a hop away in Nusa Lembongan. A top coral drift, where whale sharks make regular appearances!
• Pura Mas Gading: brrrrrrrr, it is cold alright! But we know that with microclimates come cool sightings. Expect huge scorpion fish, coral groupers, triggerfish, spotted box fish, and shoals of different types of trevally.

One of the cheapest Bali diving outfits around is Dive Concepts. Located in Nusa Lembongan, diving with them allowed me to enjoy both the local life on that island and the superb dive sites of Nusa Penida–many which are a short boat ride away.

While the best muck diving the world is found at the Lembeh Strait in Sulawesi, Tulamben and Amed are close behind. My love affair with East Bali diving lies in the seemingly-impossible combination of terrain and marine life found underneath small fishing villages.

Must list this Amed gem once more. In addition to its healthy coral, the macro life here is wonderful. Add to that the fact that it is one of the easiest dives in the area, meaning it can be enjoyed by both beginner and advanced divers. You can spot a nice variety of shrimps, nudibranchs, and crabs. It is particularly special at night.

Wellness is much more than merely physical health, exercise, or nutrition. It is the full integration of physical, mental, and spiritual well-being. And where better to ensure this integration than the Indonesian archipelago made up of over 17,000 islands? Indonesia is home to some of the world’s best wellness resorts and experiences, and is truly […]

6 Lesser-Visited Destinations to Experience in Indonesia

Have you ever thought to experience Indonesia outside of Bali’s digital nomad hub? There’s so much more to see throughout the 17,000 islands that make up Indonesia! From colonial architecture to beautiful lakes, tasty food, and fascinating religious sites, there’s quite a bit to be discovered. Alongside Indonesia’s Trip of Wonders, I had the […]

HOW TO GET FROM BALI TO LOMBOK VIA FERRY

Getting the ferry from Bali to Lombok is a pretty straightforward journey if you have the right information. In this blog post, I will give you all of the tips you need to know before making the trip over to Lombok on the ferry. There are several different options when considering how to get from […]